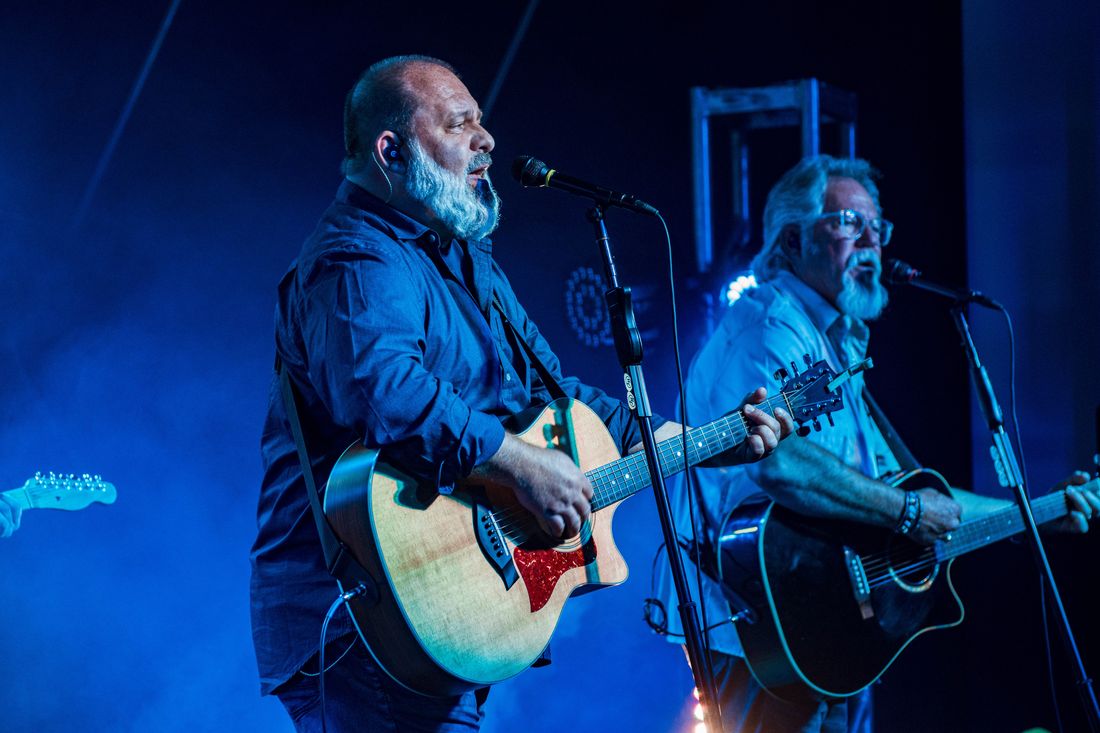 The name Jackson Heights is a new name to the Christian Music scene but the band has a rich history!

In the 1980’s, the Dixie Melody Boys from Kinston, North Carolina, were a pure Southern Gospel four-part harmony quartet. While they were very successful in the business, Ed O’Neal, his son Allen, and Kent Humphrey, along with other group members had a desire to make a musical change.  They all liked the style of that day’s country music but as Christians did not embrace the lyrics or lifestyle.  So with the help of several producers and song writers they created the sound that launched the DMB Band. It was pure country music with a powerful message and positive lyrics.

The band was made up of vocals, key boards, drums, bass guitar, lead guitar, steel guitar and acoustic guitars. This live music with a progressive country sound was a new beginning for the Christian music market. It was known as Christian country!

While the public liked the sound, the DMB Band quickly discovered there was no radio market for their music.   While several large stations, both southern and contemporary, played the DMB Band’s music; they were few and far between.  Radio programmers found this new musical style too country for contemporary stations and too progressive for southern gospel stations.  Still, the DMB Band had several songs that made the charts like Last Train to Glory, Good Ole Boys and Run Little Brother.

While the band worked with many acclaimed producers such as Randy Scruggs and continued to travel for 8 years, the financial burden of keeping the group on the road eventually became too great. In September, 1988 the band called it quits and all members moved on to pursue other interests.

In October 2012, after 25 years apart, the DMB Band gathered for a reunion in Kinston, NC; the place where it all began.  The guys had a wonderful time renewing old friendships and reminiscing about their days on the road, playing the music they loved.   The band had no idea if anyone would still be interested in their music after so many years, but friends and fans showed up anxious to hear the Christian country music the DMB Band pioneered.  The years melted away as they performed together for the first time in a quarter century.  Once on stage, this “band of brothers” fell right back into a comfortable rhythm vocally and musically.  It was quickly evident the message and classic music of the DMB Band is timeless!

But with Ed O’Neal still touring with his southern gospel quartet The Dixie Melody Boys, the name The DMB Band became a little confusing.  So in 2015, the guys decided to make a name change and the name became Jackson Heights.  Where did that name come from?  At one time in the 1980’s, all of the guys lived in a little community called Jackson Heights and so the name was a natural fit!

The band is busy planning their 2022 tour as well as releasing our newest recording " Live Across America ". It will be available on our website, I-tunes and all major markets. And our last recording " This Thing Called Life " is currently available as well as our project prior to that " No More Looking Back ". So, download them all or order the CD's for the latest & best of our Christian Country music!

Jackson Heights has a great past of pioneering a style of music in the 1980’s but the brightest days are still ahead!

KENT HUMPHREY started his career in music in 1981 when he became the lead singer of the Dixie Melody Boys who later became the DMB Band. He was also a part of the band MidSouth in the 1990’s and has received numerous music industry awards including several CCMA Awards, a Grammy nomination & in 1996, won The Dove Award for “Country Recorded Song Of The Year” with the song “Without You (I Haven’t Got A Prayer)”. In 2018, Kent received the “Living Legend “ Award by the Inspirational Country Music Association.

Kent lives in Hendersonville, TN. He has been married to his wife Marie for 34 years and they have a daughter Emily, a son Jordan, daughter-in-law Jenny and 2 grandsons Harrison and Beau.

ALLEN O'NEAL began his career in gospel music with his Dad, Ed O’Neal, who owns a well-known quartet from Kinston, North Carolina named The Dixie Melody Boys.  In the 1980’s, the group was a pure Southern Gospel, four-part harmony quartet. While they were very successful in the business, group members had a desire to make a musical change.  They all liked the style of that day’s country music but as Christians did not embrace the lyrics or lifestyle.  So with the help of several producers and song writers they created the sound that launched the DMB Band. It was pure country music with a powerful message and positive lyrics. After 15 years in the music business, Allen realized it was time to devote more time to his family. So over the next several years he was very involved in his home church as a singer and technical director. Allen and Teresa have two boys, Austin and Logan, who are both married and one granddaughter. Today, Allen loves traveling and playing music with the guys in Jackson Heights and looks forward to spending his remaining musical career with the band.

FRANK SUTTON began his career with the Dixie Melody Boys in the 1980's.  Frank was initially hired to play bass but within a year he also took over the baritone vocal part.  A few months later Frank was moved to bass and vocals for the DMB Band where he stayed until his departure to take care of his new family.  After a twenty-five year break from christian music Frank was asked to join the guys for a reunion concert with the DMB Band. So with the band's name change to Jackson Heights, Frank has rejoined the guys touring all across the nation.

Frank now lives with his wife Carol just outside of Nashville, Tn. He has 3 adult sons, Landon, Chance & Logan.

OLAN WITT has two passions in life: the Music Business and Ministry. He and his wife Julie live in Nashville, Tennessee where he owns and operates an entertainer tour bus leasing business. He is also actively involved in his home church,  as well as the Bridge Ministry which helps meet the needs of the Homeless and Poor throughout middle Tennessee.